I love road trips in the car. Travel is not just getting to a place; sometimes the adventure is everything in between.

We took a late winter road trip down to the southwest desert through the Navajo Reservation and then went smack into the heart of the Hopi Indian Reservation.

The Hopi of northeastern Arizona still live in towns they were inhabiting in the 1500s. The major villages of the Hopi are situated on the tips of three finger-like projections at the southern end of the Black Mesa. This part of the country is beautiful.
The town of Oraibi located on Third Mesa is the oldest continuously inhabited town in the United States. Its location has been at the same site since around A.D. 1150. We stopped to check it out, and it’s truly amazing!

The traditional Hopi way of life is a spiritual and hard one. Hopi people sustained themselves in the northern Arizona desert without the benefit of rivers or streams. Hopis gathered drinking water from natural springs at the base of the desert mesas, and cultivated strains of corn, beans, squash and melons that could thrive in the harsh desert environment. Rain is the life-giving reward for following the Hopi way: working hard, praying, singing, taking part in ceremonies and living a good life. For hundreds of years the Hopi worked at many crafts like pottery, basketry and weaving.

Driving below Second Mesa, we pulled over to check out one of the local craft shops. Being a jewelry artist I was drawn to the beautiful silver jewelry. I didn’t have a clue about Native American jewelry so I asked the woman working there if the beautiful bracelet I was oohing and aahing over was Hopi or Navajo. I realized how little I knew about Native American jewelry when she told me it was Hopi. I was so intrigued by the Hopi jewelry that I bought a book about the history of Hopi silver so I could learn as much about it as I could.

The book was interesting. I learned that in prehistoric times the Southwestern Indians did no metalwork and had no domesticated animals. In the 1500s the Spaniards were the first Europeans to contact the indigenous inhabitants of the Southwest. Many, many years after the Spaniards’ arrival the Native Americans acquired flocks of sheep and horses. After they obtained horses there was a greater need for metalwork because of the need for bridle bits.

Silver jewelry making was introduced to the Hopi and other southwest tribes by the Spaniards and other European settlers in the 1800s. The Hopi, as did other groups in the Southwest, learned metal working and silversmithing from the Spanish. However, it wasn’t until the 1940’s that the Hopi artists adopted their unique style of overlay.

The Hopi overlay jewelry was innovated by Fred Kabotie and Paul Saufkie in the 1940s as a new art form incorporating traditional pottery designs into silver jewelry. Overlay jewelry is produced by cutting a design into a sheet of metal and soldering that sheet onto another, creating a distinct recessed design. Funded by a Federal Government grant, Kabotie and Saufkie trained Hopi World War II veterans in the technique and founded the Hopi Arts & Crafts Guild which propelled the art form into a Hopi institution.

The exceptional thing about the Hopi craftsmen is the belief in their culture that they include in their work. Hopi jewelry is renowned worldwide. Unfortunately, there is a minus side to the popularity. It is being replicated in many other nations, using Hopi designs copied from books and displays. It is then either made by hand or machine made in much cheaper versions. These inferior copies often end up being sold as genuine Hopi pieces. Luckily, many dealers who recognize this refuse to handle such merchandise. 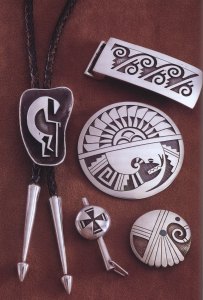 In choosing a piece of silver overlay Hopi jewelry, besides being drawn to it style and design, inspect the piece to establish the quality of the workmanship. Always check the reverse side of each piece for the hallmark of the silversmith. Every Hopi silversmith has a unique hallmark and uses it as his or her signature. The bracelet I bought at the craft shop below the second mesa had the initials LK on the inside. I looked it up and it was made by Lucion Koinva, of the Sun’s Forehead clan and from the village Shungopavi. It’s a beautiful piece and I rarely take it off.

While visiting the mesas we visited the Hopi Cultural Center craft cooperative. A sign posted on the door stated that due to the economy they weren’t buying crafts or jewelry from the local artists to sell at the store. To some of the Hopi this is how they survive. It’s sad to think that local crafters might be struggling to make a living due to lack of demand. We happily purchased another beautiful bracelet made by Loren Sakeva Qumawunu of the Corn clan. He also is from the village of Shungopavi. This bracelet is made of silver and copper and is very unique. His hallmark stamped inside the bracelet is the of the tadpole. I sure hope that more people discover Hopi jewelry so that this art will live on. I’m looking forward to purchasing my next piece.