When I heard about Voodoo Donuts‘ soft raised donuts covered in sweet maple frosting and crisp bacon, I thought I’d died and gone to heaven. The last couple of trips to Portland, Oregon we’ve stopped by Voodoo’s pink building to wait in line for our chance of snagging one before they were sold out for the day. Desserts with bacon are nothing new to the culinary world. Bacon-covered chocolate, bacon brownies, and bacon delights even going mainstream with Jack in the Box introducing the bacon milkshake. Say it ain’t so.

A few weeks ago, craving a Voodoo maple bacon bar, I found this recipe for maple bacon cupcakes and made them for a group of friends. Besides being easy to make, they got the thumbs up as they went down gullets. It’s not exactly a Voodoo donut but this recipe is a keeper! 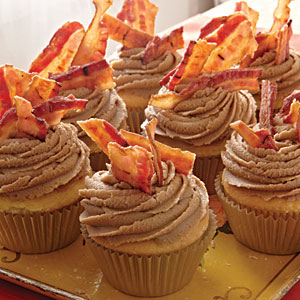