They say some things happen for a reason. I’m not so sure if it’s by chance, fate, or even luck that my full-time home is located in a beautiful little valley not far from the Weiser River Trail. This recreation trail is located in a lovely part of Idaho just east of the Idaho-Oregon border and near the deepest river gorge in North America, Hells Canyon.

It also just so happens that some of the places along and near the Weiser River Trail are former homes of some of my ancestors. From the 1880s through the mid 1900s, a good number of my family on my dad’s side were born, married, died, and buried in towns and places near the trail. All of my immediate family moved away from this area years ago, my only connection to this place until recently was seeing a few old, faded black and white photographs. 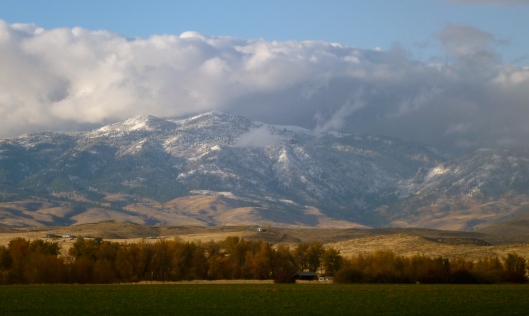 The Weiser River Trail, a former Union Pacific Railway corridor, starts in the town of Weiser and runs northeast for about 84 miles. The trail will take you through the even smaller towns of Midvale, Cambridge, Goodrich, and Council before ending four miles west of the town of New Meadows near the Tamarack Saw Mill. The railway, built in 1898 and finished in 1911, brought growth to this part of Idaho with the boom of mining, cattle, sheep, farming, and logging.

Eventually the railroad closed for good. The Union Pacific Railroad deeded the abandoned railway in 1997 to the non-profit group the Friends of the Weiser River Trail under the 1983 Railbanking Act. This wonderful trail is also part of the Rails-to-Trails program and was designated a National Recreation Trail in 2010.

Just east of Cambridge a few miles away on Hwy 95 are the towns of Alpine and Indian Valley. This is where my family history near the trail begins. My great grandfather William Ross Lane was born in Alpine, Idaho in 1885. He was one of eight children of Martin Burton Lane and Sarah Cornelia Hoffman Lane. Bill Lane met Sadie Ethel Woods in Indian Valley, Idaho and they were married in Alpine in 1904. They eventually settled down in the nearby town of Goodrich and had three boys. Today, not much is left of the towns of Alpine or Indian Valley except for a few scattered farms, ranches, and abandoned buildings. In Alpine there’s a small general store and, behind it, the old one room Alpine School.

I’ve been cycling, walking, and running the 20-mile section of the Weiser River Trail between Cambridge and Council almost weekly this past late summer and early fall. This part of the trail is remote and away from roads. Spending time on the trail is a spiritual journey of sorts and gives me the feeling of going back in time to when life was much simpler and quieter. This feeling keeps drawing me back.

I’d guess the landscape alongside the trail hasn’t changed a lot since the railway began full operation in 1911. Most of the time you can see more wildlife and animal tracks than any signs of humans. I’ve come around a corner and have seen a herd of elk standing in the middle of the trail. We’ve seen a beautiful golden-brown black bear crossing the river, mule deer, coyotes, foxes, coveys of quail, chukar, grouse, wild turkeys, blue herons, tons of ducks, and, just recently, migrating Canada geese.

One of the many cattle control gates between Cambridge and Mesa Siding.

One of my favorite sections of the Weiser River trail begins near the town of Goodrich, located about six miles west of Hwy 95 between Cambridge and Council. To access the Goodrich trailhead, you take a short drive on Goodrich Creek Road, a decent county dirt road. You can also get to Goodrich from Cambridge by driving past Mundo Hot Springs where the road then turns to dirt and heads north to Goodrich along rolling hills with beautiful views.

The town of Goodrich was established in 1901 and was originally called “Milligan” until the named changed to Goodrich in 1912. My grandfather Lloyd Lane was born in Goodrich in 1910 and lived there most of his life. The one-room schoolhouse, still standing, was built in 1910. My Grandfather attended school in that building, along with his two older brothers Wilbert and Arnold.

Some of my family died in Goodrich. My great great grandmother Sarah Elizabeth Baker Woods died there in 1931. She is buried in the Indian Valley Cemetery alongside her husband Elijah Woods who died in 1904. My great grandfather William Ross Lane died in Goodrich in 1943. Towards the end of the Great Depression a lot of people in Goodrich lost their farms, including my grandfather Lloyd Lane. I suppose most people just eventually moved away because, in 1956, the school closed, and, the following year, the post office also closed. Today, about the only thing left in Goodrich is the one-room school house and a few private homes and ranches.

We drove out to Mesa Siding trailhead to explore the trail on foot. If you blink you might miss the trailhead right next to U.S. route 95 just past Mesa Siding Road between Mesa Orchards and Council on the left if you’re heading north. We walked the trail towards Goodrich and it was about 2 miles before running into the Weiser River. Back in 1908 they built a seven-mile-long wooden flume to carry water from the Weiser River up to the 1,400 acre apple orchard in Mesa that at one time was one of the biggest in the world and employed five hundred men, including my great grandfather William Jefferson Brown of my dad’s mothers side.

In 1920, an aerial tramway, 3-1/2 miles in length, was constructed to transport thousands of boxes of apples from the orchard down to the railroad siding at Mesa to be loaded onto the trains. My dad was born in 1938 in one of the homes no longer standing in Mesa Orchards. He said that my great grandfather Brown worked in the orchards irrigating the trees, while his mom Margaret and grandmother Elsie Brown would sometimes take the train down to Weiser for shopping which, at the time, was the big city. What was once a very long car ride on rough roads was shortened to three hours in a passenger train car. My great grandmother Elsie Brown came to the United States from Scotland when she was 21 years old. Her plan was to visit her brother living in Montana for a few months but she never returned to Scotland again. In Montana, she met her future husband, got married and then they moved to Mesa Orchards. I wonder if the lush green rolling hills in the spring around Goodrich and Mesa reminded her of Scotland? I’ve been to Scotland a couple of times, and I think the landscapes Between Cambridge and Council in the spring time look a lot like the Scotland Highlands.

The Mesa Orchards remained in production until 1954 when a late frost froze 40,000 boxes of freshly picked apples, still under the trees. After our walk on the trail we drove up to Mesa Orchards, just a short side road off of 95. A few apple trees still dot the hillside with deer grazing underneath them. Just a handful of old homesteads are all that is left of this once thriving orchard. After the orchard’s closure, most people moved away from the area which probably coincides with the closure of the Goodrich School and post office in 1955 and 1956.

The Weiser River Trail is great for cycling, running, and walking. I’ve also seen people on horseback which looks like a fun and interesting way to travel. Since the trail is an old railway, the trail is flat with no hills to climb so it’s perfect for all ages. The dirt trail is fairly smooth and the cattle control gates on this section will make you stop every now and then to open and close them but I don’t mind since you can see more that way by taking your time.

The entire Weiser River Trail system gets some visitors and is slowly getting noticed but it’s still a hidden gem that has yet to be discovered. The little towns along the way could use the boost in recreation dollars since these days they can’t entirely rely on ranching, farming, and logging. When we were researching places to move four years ago, the access and recreation on the Weiser River Trail definitely was a huge draw for me.

It seems that my life has now come full circle and this is where I belong.