Bedridden with the flu bug last September, I had plenty of time to stare out of my bedroom window towards the steep hills to the west. From my angle, I could just barely make out the letter C on the hillside above town. The letter C stands for the town of “Cambridge,” our new home in a quiet part of Idaho.

I’ve seen a few of those letters on hillsides in my lifetime but I’d actually never thought much of them until that day confined to bed. I started some research on my laptop and discovered that there are around 500 hillside letters scattered across United States, with most of them in the west. Some were built as community landmarks but most as a source of school pride and rivalry.

The first hillside letter in the United States was built in 1905. It was a big C on the campus of the University of California at Berkeley, which coincidentally happens to be my husband’s alma mater. Idaho has 34 hillside letters, with Cambridge being the only C in the state. The majority of letters dotting the west were built in the 1920s and 1930s. Our hillside letter in Cambridge is maintained once a year by the high school senior class. This year, my husband asked all seven of his senior English students if I could tag along while they added a fresh coat of paint and changed the number to the current year. My main goal for the trip up the hill, besides wanting to do a short blog and photo essay about it, was actually to see the size of the C up close since from a distance it doesn’t really look that big. I felt privileged and honored that they agreed to allow me to accompany them.

Getting to the base of the hill below the C required us to take a dirt road on a local ranch. In our small town, where everyone knows everyone, it sometimes isn’t a problem but it’s always a good idea to ask first before trespassing on private land. 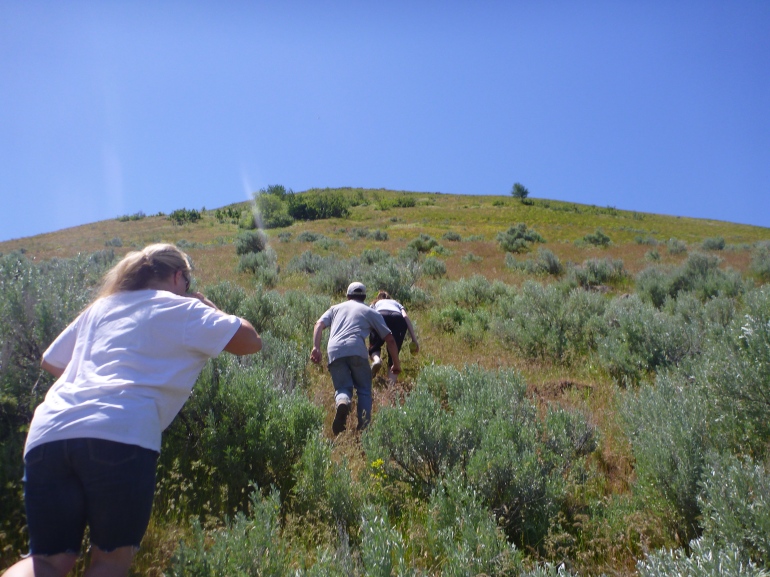 Once we found it I was amazed at the size of the C and the size of the rocks, and to think that I almost suggested bringing only a couple cans of white spray paint. On this hot day I’m glad we only had to change one number. Skye, Hillary, Ryan, Jesse, and I formed a line and started passing the rocks, while Mitch and Josie were still slowly driving the ATV to the top of the hill with the paint and brushes, trying to find us.

It took about four hours for the six seniors to complete the project. On the walls inside the school are rows of photos from graduating classes going back to the early 1930s. Imagine all the stories, great times, accidents, or even bad weather over the past years. Looking at the photos of the senior classes from year to year, one can see they’ve gradually gotten smaller and smaller. Cambridge like a lot of small towns in America is slowly decreasing in population as the kids move away and never come back. Hopefully, in the future the seniors will carry on the painting tradition, even though it’s more work with fewer students. It ended up being a wonderful afternoon spent with some respectful young adults that were very kind to me and thankfully didn’t get paint on me. It’s nice to feel welcomed and part of the community. From now on, I will look at the C on the hill with fond memories of time spent with the Cambridge, Idaho graduating Class of 2014.