Today, I was in our small local general store waiting to pay for my things and noticed a paper flyer hanging from the ceiling by the checkout. The flyer was announcing a contest for local kids to write an essay about their favorite memory from this past summer. The contest made me start thinking about my own summer vacation which seemed like just yesterday. The vision that kept coming to mind was the awe-inspiring landscapes of southwestern Montana near the continental divide of Montana and Idaho.

It was these landscapes that took center stage during the 15th annual Headwaters Relay. The event was a 3-day, 232-mile, self-supported running relay race starting in Three Forks, Montana and ending at Hell Roaring Creek, the utmost headwaters of the Missouri River, the longest single river in North America. Because the race course was mostly run on remote dirt roads, narrow two-track, and some private land, only 20 teams were allowed to start to minimize traffic. Rules stated that each team must have a minimum of 5 runners and a max of 10 runners, and each person on the team had to run at least one leg per day. Teams also had to provide their own race support. The 3-day race wasn’t run around the clock like some races; instead, at the end of each day’s predetermined finish line, the race stopped for the night to camp before starting up again early the next morning. This year only two new teams were invited to race while the rest were grandfathered from doing it in the past. Our team of friends and family, young and old, were one of the two new teams. Lucky.

On the cool, early morning of July 29th, 2016 just before the sun came up, our running party arrived to the Missouri River at Three Forks, Montana. Our first runner, Summer, dipped a part of her body into the Missouri and started us off on a incredible trip that over the next three days would take us across beautiful plains, meadows, and three spectacular mountain passes.

“We set out at an early hour and proceeded on but slowly the current still so rapid that the men are in a continual state of their utmost exertion to get on, they begin to weaken fast from this continual state of violent exertion. at 9 A.M. at the junction of the S.E. fork of the Missouri and the country opens suddonly to extensive and beatifull plains and meadows which appear to be surrounded in every direction with distant and lofty mountains; supposing this to be the three forks of the Missouri I halted the party on the Lard shore for breakfast and walked up the S.E. fork about 1/2 a mile and ascended the point of a high limestone clift from whence I commanded a most perfect view of the neighbouring country”. -Meriwether Lewis. The Journals of the Lewis and Clark Expedition. July 27th, 1805  (p.167; all quotations in this post are from the 1997 Mariner Books edition of the journals, edited by Bernard DeVoto)

211 years earlier, The Lewis and Clark expedition traveled across southwest Montana looking for the headwaters of the Missouri River. On day one of the Headwaters Relay race we followed some of the same paths as Lewis and Clark. The Corps of Discovery, comprised of Meriwether Lewis, William Clark, and a specially-established unit of the United States Army arrived at Three Forks on July 27th, 1805 after traveling 2,464 miles from their starting point on the mouth of the Missouri River. At this juncture, they named the three forks in the river, the Jefferson, the Madison, and the Gallatin Rivers in honor of the President and two of his cabinet members.

“About 2 p.m. much exhausted by the heat of the day the roughness of the road and the want of water. The mountains are extreemly bare of timber and our rout lay through steep valleys exposed to the heat of the sun without shade and scarcely a breath of air”. – Meriwether Lewis, The Journals of Lewis and Clark, August 1st, 1805. (p. 174) 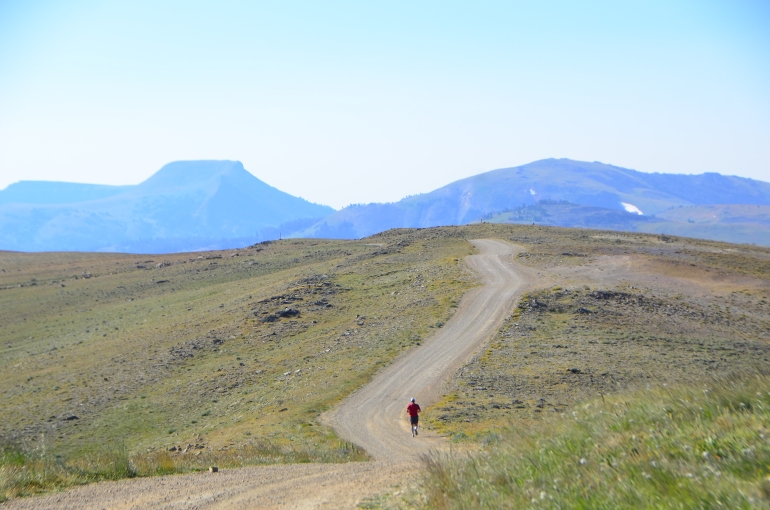 Their next decision was to correctly choose the right river to follow upstream to find the headwaters of the Missouri and hopefully their passage over the Continental Divide and to the rivers that flow downstream to the Columbia River. They chose to follow the Jefferson River which turned into the Beaverhead River. As the Corps of Discovery got closer to the current town of Dillon on the Beaverhead River, Sacagawea, the Native American woman traveling with them recognized in the distance the area where she was kidnapped as a child several years earlier and taken away from her people, the Shoshones.

” The Indian woman recognized the point of a high plain to our right which she informed us was not very distant from the summer retreat of her nation on a river beyond the mountains which runs to the west. This hill she says her nation call the beaver’s head from a conceived remblance of it’s figure to the head of that she assures us that we shall either find her people on this river or on the river immediately west of it’s source; which from its present size cannot be very distant.” -Meriwether Lewis, The Journals of Lewis and Clark, August 8th, 1805 (p. 181)

After leaving  Beaverhead Rock, they traveled west and up and over the Continental Divide at Lehmi Pass and into what is now Idaho. The Corps of Discovery never did find the true utmost source of the Missouri River. When they followed a creek up to Lemhi Pass they thought they’d found the Missouri headwaters but they were wrong. They were fortunate that they didn’t find the true headwaters because they would have been forced to backtrack from Hell Roaring Creek for almost a hundred miles in the heat of the summer and delay getting to the Pacific Ocean before winter. Lucky.

At the distance of 4 miles further the road took us to the most distant fountain of the waters of the Mighty Missouri in surch of which we have spent so many toilsome days and wristless nights. thus far I had accomplished one of those great objects on which my mind has been unalterably fixed for many years, judge then of the pleasure I felt in all[a]ying my thirst with this purse and ice-cold water which issues from the base of a low mountain or hill of a gentle ascent for 1/2 a mile. -Meriwether Lewis, The Journals of Lewis and Clark. August 12, 1805.

Racing for three days in a row, a total of 49 relay legs between everyone, navigating new territory, being outside in the extremely hot sun all day, and getting each runner to a designated exchange with lots of detours was a bit challenging for us newcomers. Our team of runners and support crew did get to our destination finish after 33 hours and 13 minutes of running time for a dip into the cold, clear mountain waters of Hell Roaring Creek in Centennial Valley, Montana. The Corps of Discovery did arrive to their destination at the Pacific Ocean in Astoria, Oregon on November 7th, 1805, before the cold, damp, winter.

Everyone agreed that what made the Headwaters Relay so amazing was the camaraderie, scenic vistas, fun times at camp every night, and the personal goals achieved. We are already talking about maybe doing it again next year! It’s great to be lucky!

I made a 30 minute video to highlight some of the intimate moments and race footage for my teammates to watch. I thought I’d share it with you so that you could get a better feel for what the Headwaters Relay race is all about. Enjoy.

(1/09/2018 update: without notifying me, YouTube removed the entire audio on the video below due to copyright music laws on one of the songs that was used in my video. Until I can remake it, you’ll have to watch without audio.)