No thanks to John F. Kennedy’s attempt to improve the fitness of millions of children, the “Go you Chicken Fat Go” song was ingrained in the memories of tens of thousands of kids, including myself. 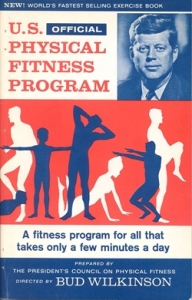 Those of you also suffering from post traumatic PE stress disorder remember being humiliated performing calisthenics to this song in the late 1960s and early 1970s. In my case, it was performing this very outdated song while wearing the one piece gym suit uniform that we were required to wear in junior high. Our “monkey suits,” as we called them, were bright royal blue in color and hit most of us about knee length. Luckily, our suits had snaps which made getting those horrible things off quickly after class a breeze.

Miss Blank (afraid to use her real name) was the stereotypical sadistic PE teacher from my junior high and high school years. Butch haircut, un-stylish polyester men’s coach shorts, jangly janitor keys dangling at her waist, and a whistle around her neck, her fast walking cadence was a dead give-a-way to her terrifying proximity. She was the worst enemy of uncoordinated, clumsy kids who would freeze when they heard her coming down the hall. 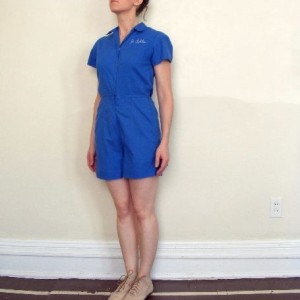 We would all stand at attention as she entered the room to put the “Chicken Fat” record on the record player for our six minutes of hell. The “Chicken Fat” calisthenics drill was nonstop arm-swinging, push-ups, marching in place, jumping jacks, and lying on the floor with your legs up pretending to pedal a bicycle really fast. If an alien had happened upon this scene it would never have wanted anything to do with our strange planet.